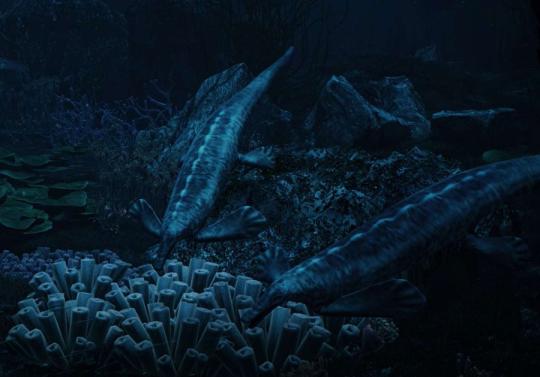 An image of the eretmorhipis carrolldongi (Photo provided to chinadaily.com.cn)

Two new specimens of the reptile discovered reveal that the animal, eretmorhipis carrolldongi, lived about 248 million years ago and showed similar hunting methods to today's platypus by using its bill made of cartilage.

The animal, about 70 centimeters long, also had a small head, tiny eyes, four flippers for swimming and a long, rigid body with triangular bony blades protruding from the back.

The specimens represent the oldest record of reptiles and mammals with extremely reduced visual capacity and used non-visual cues for prey detection, according to the paper published in Nature in January. 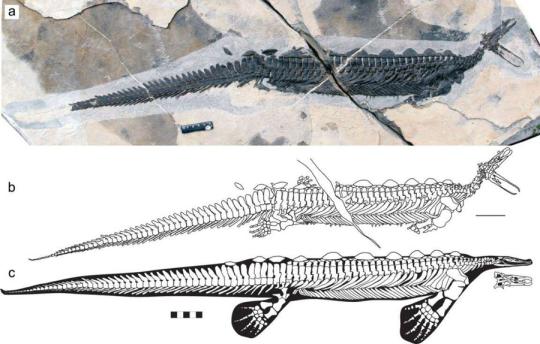 Before the study, eretmorhipiswas only known from partial fossils with missing skulls, said Ryosuke Motani, a paleontologist at the University of California, Davis and co-author of the study.

"This is a very strange animal. When I started thinking about the biology I was puzzled," he said.

The discovery has great significance in further understanding prehistoric ecological diversity of marine predators, the plate movement of the Earth and the evolution of marine ecosystems, scientists said in a statement.

Eretmorhipiswas found at a fossil lagoon which used to be a shallow sea. It evolved in the lower Triassic Period, a geologic time that spanned about 51 million years to the beginning of the Jurassic Period.

Succeeding the Permian Period, a time when the Earth suffered the largest extinction in history and 96 percent of marine species and 70 percent of terrestrial vertebrates died out, the Triassic Period marked the revival of the planet's biosphere and the evolution of life.

The fossils provide new evidence for the full restoration of marine ecosystems after the mass extinction at the end of the Permian Period, scientists said.