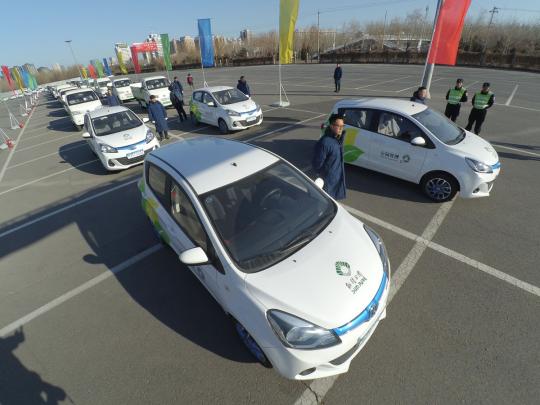 A total of 114 new energy cars are handed over at Beijing's Chaoyang Park to improve air quality of the capital. (Photo provided to China Daily)

Local authorities in Beijing say they plan to implement a stricter emissions standard starting from July this year. In doing so, they will join the growing effort being undertaken by many cities in the country to clean up the air in the world's largest car market.

The State VI standard, which is equivalent to the Euro VI standard, is expected to slash emissions of major exhaust pollutants around 50 percent from the current State V standard.

Starting from July 1, heavy-duty gas and diesel-powered vehicles sold in Beijing should meet the State VI standard, said the Beijing Municipal Ecological Environment Bureau in a document released on its website last Monday.

It said light vehicles, which include light commercial vehicles and passenger cars, shall be in line with the emissions standard from Jan 1, 2020. Light vehicles account for the absolute majority of vehicles sold in Beijing and any other Chinese cities.

"The new emissions standard will further improve emissions conditions and cut pollutants, thus improving the air quality," the bureau said in the document.

As one of the first cities in China to limit car sales, 100,000 new license plates are handed out a year in the capital city.

Coupled with older cars traded for new ones, total new car sales in the city stood at 604,500 in 2018, according to the China Automobile Dealers Association.

The number of new car sales is expected to hover at about the same level this year.

Beijing's transport authority expects to control the total number of vehicles at fewer than 6.2 million by the end of this year.

Several other cities have moved faster in implementing the latest emissions standard.

Local authorities in Tianjin announced late last month that the State VI standard will be put in place for all vehicles starting from July this year, which means vehicles that do not meet the standard are not allowed to be sold or registered in the city.

Analysts say carmakers should speed up their pace to launch more lower-emission models; otherwise, the new regulation may exacerbate the already chilly automotive market, which fell for the first time last year since 1990.

Currently, the absolute majority of models available at dealerships are produced in line with the State V standard. Some customers are complaining the small number of choices and delaying their purchase plans.

According to the China Automotive News, there were 554 officially approved State VI models by the end of late November 2018, only 12 percent of the available State V model number.

In addition to the new emissions standard, more stringent policies on fuel consumption are likely to prompt carmakers to come up with more fuel-effective models and thus help boost sales of new energy vehicles, including electric and plug-in hybrid ones, according to analysts.

Starting from this year, carmakers are required to sell new energy vehicles to amass credits accounting for 10 percent of its total car sales, which will grow to 12 percent in 2020, according to the Ministry of Industry and Information Technology.

The ministry also set a goal for carmakers to cut new models' comprehensive fuel consumption to 5 liters per 100 kilometers by 2020. The decree has already prompted some carmakers to make extra efforts on lightweight bodies and to introduce smaller, three-cylinder engines, which Chinese customers are reluctant to accept so far.

New energy car sales stood at 1.25 million in 2018, up 61.7 percent year-on-year, and the figure is expected to reach 1.6 million this year, according to the China Association of Automobile Manufacturers.